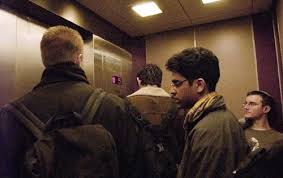 Have you ever noticed how people ride in elevators?  The next time you do see if these observations are accurate.  The moment you get into an elevator, if you are alone that space belongs to you.  Some people go straight for a corner and some people occupy the whole space.  Those folks might even pace from side to side, but as soon as that elevator dings and another person cautiously creeps in, an interesting phenomenon ensues.  Whether you are a corner dweller or a whole space dweller, when that other person enters, like two men in a boxing ring you immediately “go to your corners” as if you are waiting for the bell to sound signaling the first round of a prize fight.  A few seconds later, the bell indeed sounds and another person enters “the ring.”  Again, we you might re-shuffle to keep the other two people at a distance, but then one more flight down and the bell sounds again.  Two people this time enter the space while in the middle of conversation, yet more than likely these people will cease their conversation.  Everyone avoids eye contact and you search for your own space as there seems to be a growing anxiety and the desire to keep others at a distance.

Lets look at 2 passages from Genesis…

Gene 1:26 Then God said, “Let us make man in our image, after our likeness. And let them have dominion over the fish of the sea and over the birds of the heavens and over the livestock and over all the earth and over every creeping thing that creeps on the earth.” 27 So God created man in his own image, in the image of God he created him; male and female he created them.

In Genesis 1:26 we discover that we were created in the image of the Triune God.  God is one.  For eternity past the Father, Son, and Spirit have been one.  Within the Godhead we find community, we find family, we find personality, we find personhood, and we find love.  The highest form of all these things in fact.  For eternity past and forever in the future the Father, Son, and Spirit have existed in perfect community.  Community we all long for and the kinds of relationship we were supposed to have being made in the image of our Creator.  But the fall brought a fracture to our relationships.  Enmity.  Alienation.  Alienation between God and man, between man and himself, between man and man, and between man and creation.  Adam’s sin brought a curse and tainted everything about God’s good creation, severing and marring all social institutions that are good for man.  Despite Adam’s sin there is a promise given in Gen 3:15.  The promised seed.  A Son.  A Son who would crush the Serpent’s head.  The Son who would enter the world of enmity and take upon himself the wrath of the Father that we deserve.  This Son took on human flesh and became the man Jesus.  This sinless man who is also God the Son, sat in another garden called Gesthemane, waiting for his betrayers to arrest him, praying to the Father, he said…

Luke 22:42 “Father, if you are willing, remove this cup from me. Nevertheless, not my will, but yours, be done.”

With this cup he held the balance of all human community and relationships in his hands and by taking the cup and drinking, by taking a criminal’s death he experienced alienation like we cannot comprehend.  Betrayed by his closest friends, scoffed and mocked by his enemies, his father turning his face away, Jesus made it possible for us to call God “Abba,” our Father.  Brought into a right relationship with God.  Jesus makes it possible for us to experience what it is to be united to the Father, the Son, and the Spirit — to be in union with the perfect community.  I believe every good community we experience in this life is but a shadow or a taste of what exists in the Trinity.  We long for this community and yet we are still resistant.  We long for it and as Christians we are to live it out in our relationships with others. God is continuing to work in us, uniting corner dwellers, and will one day unite us to the perfect peace and relationship that our hearts, minds, and bodies crave. Jesus prayed these words from John 17 and accomplished these things for us.  I want to encourage you this week to meditate on the implications of His words from John 17…

John 17:1 When Jesus had spoken these words, he lifted up his eyes to heaven, and said, “Father, the hour has come; glorify your Son that the Son may glorify you, 2 since you have given him authority over all flesh, to give eternal life to all whom you have given him. 3 And this is eternal life, that they know you the only true God, and Jesus Christ whom you have sent. 4 I glorified you on earth, having accomplished the work that you gave me to do. 5 And now, Father, glorify me in your own presence with the glory that I had with you before the world existed.