What?
You’re invited to join us March 23rd for a morning of colorful fun! This family fun event is a joint fundraiser between Christ Clinic, Clothed by Faith, Compassion Katy, The Ballard House, Katy Christian Ministries, and Hope Impacts; nonprofits that aid the under-served in the Katy community.

Register to: Run/Walk/Volunteer/Sponsor or Be a Vendor!
Register by March 10th to be guaranteed a race shirt at packet pickup! We still have room for Sponsors, Vendors, Runners/Walkers, and lots of Volunteers! Sign up now! (Registrations and packet pickup not available on race day.)

Groups of 10 or more get a discount! (contact tina@itrievents.net for discount code)

DONATE
Can’t participate in the race or want to participate from home? Donate to the race and your donation will help 6 local nonprofits continue to change the lives of local families in need!

There are still a few menu items that no one has signed up to bring.  If you have not done so already, please click here to sign up to bring food, RSVP, or offer to help.  Thank you! 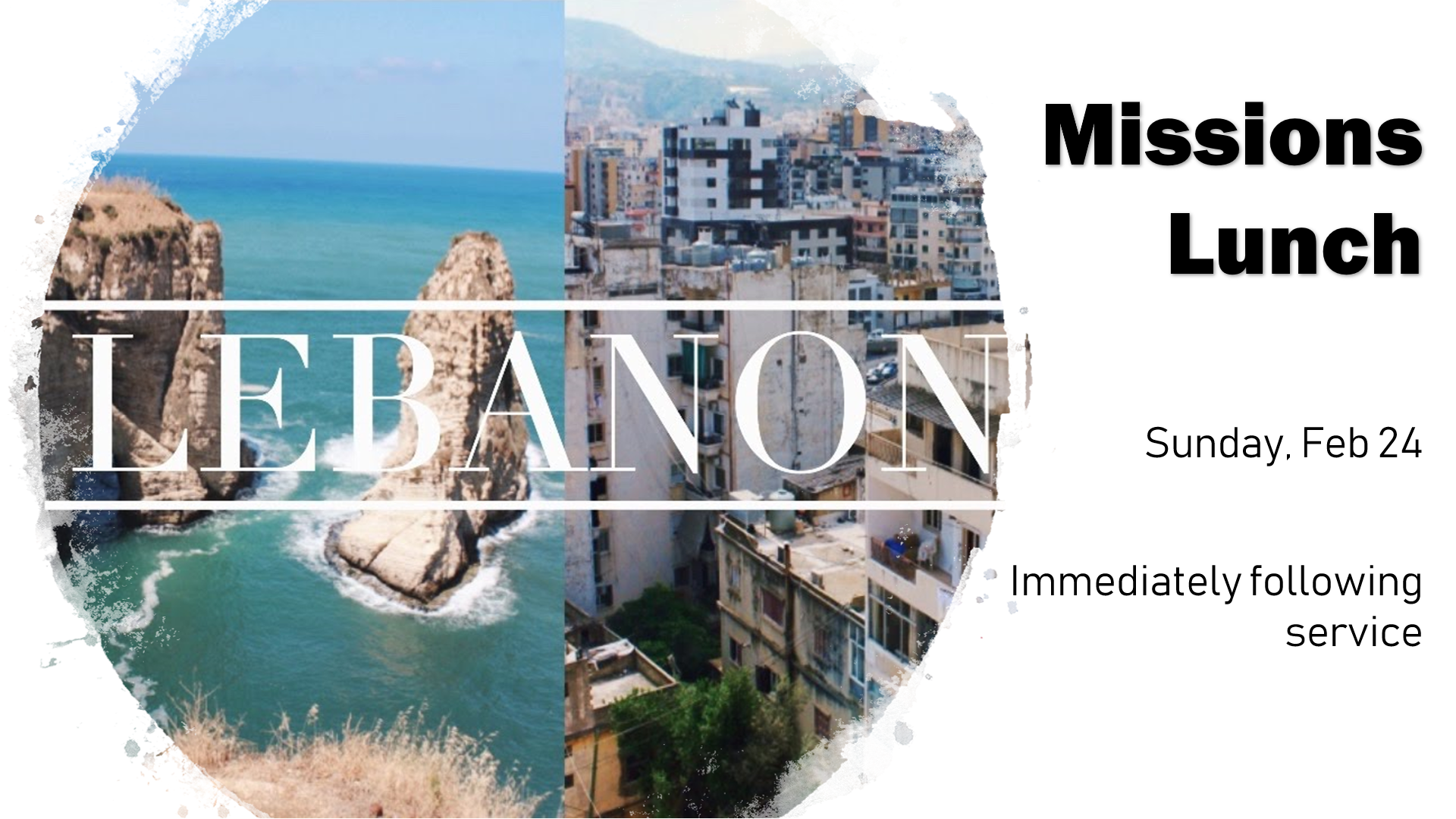 Be sure to mark your calendar February 24th! We are going to enjoy a morning of blessings with an EPC Missionary to Lebanon whom Cornerstone supports financially.  She will speak during our Sunday School hour and also a few minutes during Worship. After the service we will welcome her (and possibly her daughter) with a Lunch in Fellowship Hall.

This missionary and her husband have been our lead missionaries in that country for several years and are spending about six months on home leave now. What a joy it will be to hear how she and her husband (and their two children) have been led in Lebanon and what God is doing in their lives.

An RSVP card will be handed out soon – please let us know how many of you will be attending the lunch so that we will have enough food prepared. Cornerstone will provide the meat but we will be posting a Sign Up Genius for the sides, dessert and ways to serve.

This Missions Lunch will not only be a loving welcome but also a celebration of the work being done in the name of our Lord. Come and meet her!

Join the EPC on a one of a kind mission endeavor!

What are you doing this summer? Don’t miss out an a unique mission opportunity for your high school students. Summer Mission Jam is a new, entry mission and outreach equipping conference for students, serving among Lebanese, Bangladeshi, Yemeni, Iraqi, and Pakistani peoples in America’s most diverse neighborhoods of Dearborn and Hamtramck, Michigan.

Students will learn how to ‘bridge the gap’ with Muslims and be the fragrance of Jesus through supportive and instructive teaching and service outreach opportunities. Summer Jam starts Monday evening, July 8, and wraps up Saturday, July 13. Registration is $450 per student and includes delicious meals, comfortable accommodations, and the best missions training you can receive.

If you already have plans for this summer, consider bringing a few student leaders to check out Summer Mission Jam for future summers (Fremont, CA in 2020 & Michigan in 2021).

Summer Mission Jam is an amazing opportunity for churches, big and small, to invest in their students as they learn more about Muslims and how to interact in a way that is loving and beneficial for the Kingdom. This summer, step out and be a part of something new with the EPC denomination. We are positive it will impact your world and give you new ways to be the hands and feet of Jesus in your own communities.

If you know of anyone that might be interested in attending Summer Mission Jam, we invite you to pass it along and share on social media!

There are scholarships available for people of color through the EPC – these scholarships cover 1/2 of registration! We desire to see, within the EPC denomination, more people of color being empowered to lead and go into missions long-term through EPC World Outreach. Please contact us for more information about how to apply. 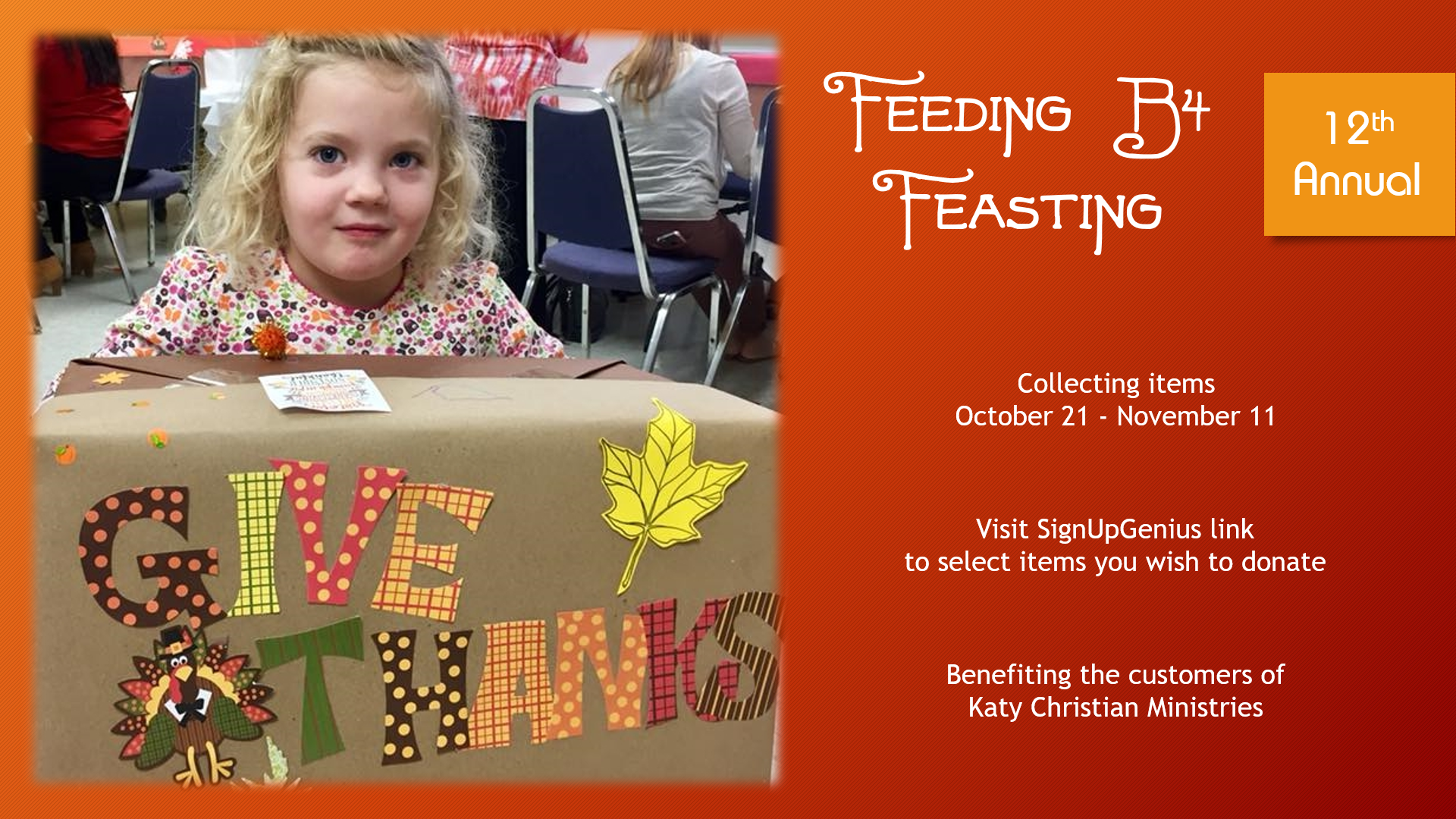 This is Cornerstone’s 12th year to host our Feeding B4 Feasting food drive.  The purpose of Feeding B4 Feasting is to provide Thanksgiving meals for the hungry before we enjoy our own feasts.  We will accept donations starting October 21 through November 11. Our goal is to put together 16 boxed Thanksgiving meals for the customers of Katy Christian Ministries. Please consider helping in the following ways:

The CSCK families will spend the morning of November 11th decorating boxes and writing letters and prayers to the KCM customers.

In response to a Turkish court’s ruling July 25 to release Andrew Brunson from prison to house arrest, officials in Washington, D.C., have issued statements supporting the decision.

Senators James Lankford (R-Okla.), Jeanne Shaheen (D-N.H.), and Thom Tillis (R-N.C.) issued a joint statement in which they called the move a “step in the right direction.”

“Today’s decision by the Turkish Court system to move Pastor Andrew Brunson from prison to house arrest is a step in the right direction and will help alleviate some of the unacceptable hardship and anguish Pastor Brunson and his family have endured over the last 20 months,” the senators said. “The Government of Turkey should now release Pastor Brunson and immediately return him to the United States, an action that would begin to restore the longstanding friendship between our two nations.”

“It is good that Pastor Brunson will have some relief after being held in a Turkish prison for more than 600 days,” said USCIRF Vice Chair Kristina Arriaga in the statement. “This is welcome news … but it is not enough. The Turkish government has deprived this innocent man of his due process rights and liberty for too long, and it must completely release him. If it fails to do so, the Trump Administration and the Congress should respond strongly and swiftly with targeted sanctions against the authorities responsible.”

Vice President Mike Pence tweeted on July 25 that house arrest was a positive development, but Brunson “should have been freed long ago.”

Turkish media is reporting that Andrew Brunson has been moved from prison and put under house arrest. According to the Daily Sabah, the EPC Teaching Elder has been moved to his home in Izmir due to “health issues.”

The Second High Penal Court in Izmir issued the ruling on July 25, which also included an international travel ban meaning Brunson cannot leave the country. The same court ruled on July 18 that Brunson be returned to prison until the hearing in the trial, scheduled for October 12.

“We are very thankful for this court ruling to allow Andrew to be detained at his house instead of behind bars, where he has spent more than 21 months,” said Jeff Jeremiah, EPC Stated Clerk. “At the same time, this trial is not over. He is still facing serious charges so we press on in praying, fasting, and advocating for Andrew.”

Brunson has lived in Turkey since 1993 and was arrested in October 2016. He was indicted on charges of having links to Fethullah Gülen, the Turkish cleric who has lived in Pennsylvania since 1999 and whom Ankara blames for the failed 2016 coup attempt, and the Kurdistan Workers’ Party (PKK), which Turkey calls a terrorist group.

In response to Andrew Brunson’s return to custody following hearings on July 18, U.S. Senators Thom Tillis, Jeanne Shaheen, James Lankford, and Lindsey Graham issued a joint statement calling for his immediate release. The court in Aliaga, Turkey, remanded the EPC Teaching Elder to prison until the trial resumes on October 12.

“Pastor Andrew Brunson has languished in a Turkish prison for the last two years, causing tremendous hardship and heartache for him and his family,” the senators said in the statement. “He is an innocent man and has been unlawfully detained simply because he is an American pastor who assists all those in need, no matter their ethnicity or religious beliefs. Turkey and the United States are longstanding NATO allies and it is imperative to the interests of both nations that Turkey starts behaving like one. We call for the immediate release of Pastor Brunson and other American citizens currently detained in Turkey, including Serkan Golge. We encourage the Administration to use all the tools at their disposal to ensure the release of these innocent people before Congress is forced to press for even stricter legislative measures that will be difficult to unwind.”

Brunson has been imprisoned in Turkey since October 7, 2016. In April, he was indicted on charges related to terrorism and espionage. He faces up to 35 years in prison.

In April, the four senators led the effort to craft a bipartisan letter to Turkish President Recep Tayyip Erdoğan calling for Brunson’s release. The letter was signed by 71 senators. Tillis has visited Turkey twice, including meeting with Brunson and attending his trial on April 16. Shaheen and Graham visited Brunson in prison in June, and also met with Erdoğan and pressed for Brunson’s release.

In previous legislative actions, Tillis and Shaheen secured a provision that directs the Secretary of Defense to submit a plan to Congress to remove Turkey from participation in the F-35 fighter jet program. The provision is based in part on legislation introduced by Lankford, Tillis, and Shaheen. Lankford and Shaheen have worked with Graham to include sanctions in this year’s State, Foreign Operations, and Related Programs appropriations bill. Those measures target Turkish officials complicit in the unlawful arrest of Americans.

The senators are part of a growing chorus of condemnation in Washington, D.C., against the court’s ongoing decision to keep Brunson imprisoned.

In an article titled “The Brunson farce” published July 17 by the Foundation for Defense of Democracies (FDD) in response to speculation following discussions between Erdoğan and President Trump, Aykan Erdemir wrote that Brunson should be released “not because of a deal, but because there isn’t a shred of evidence against him.” Erdemir is a senior fellow at the FDD and a former member of the Turkish parliament.

On July 18, the U.S. Commission on International Religious Freedom (USCIRF) issued a statement declaring that “Turkey continues to make a mockery of justice in its treatment of Pastor Brunson.” The USCIRF is an independent, bipartisan U.S. federal government commission.

In a strongly worded statement issued July 18, the United States Commission on International Religious Freedom (USCIRF) decried the decision by a Turkish court to return Andrew Brunson to prison until the next phase of the trial on October 12.

“The government of Turkey continues to make a mockery of justice in its treatment of Pastor Brunson,” said USCIRF Vice-Chair Kristina Arriaga. “Today I was hoping to see the judge order his complete release and put an end to the miscarriage of justice that Pastor Brunson’s entire case represents. Turkish authorities still have not provided one good reason for depriving Pastor Brunson of his liberties. The Trump Administration and the Congress should continue to apply pressure, including using targeted sanctions against officials connected to this case, until Pastor Brunson is released.”

In its statement, the USCIRF reported that former church members testified against Brunson for more than two hours on July 18. When the judge asked Brunson to reply to the witnesses, he said: “My faith teaches me to forgive, so I forgive those who testified against me.”